In Repost, Vileine’s women shine their light on current feminist articles. This time: sexting is treated as a major issue – but is stopping teenagers from taking sexy photos a solution?

Today is Safer Internet Day. This means that attention is again paid to sexting among adolescents; specifically, sending nude photos and videos of their own body.

“Dozens of young people end up in psychiatric clinic after sexting,”] headlined RTL Nieuws (trans. RTL News) (link in Dutch). “Therefore, prevention of #sexting is very important!” responded Qpido in a tweet (tweet in Dutch. Qpido is an organisation that, in cooperation with the vice squad, visits school to educate children on this topic. “1 in 15 young people are into #sexting,” tweeted a police officer (tweet in Dutch). “I wonder how many will regret it.”

Sexting is not the issue

Education in this manner and sexting prevention are incomplete. What Qpido and the officer are omitting is the cause of the regret or the mental issues: not sexting itself, but the unwanted distribution of the images. There is a huge difference between these two. On the one hand, there is flirting of experimenting – if all is well: with mutual consent. On the other hand, there is bullying or extortion – without consent. Although sexually explicit images of minors are officially child pornography, the Public Prosecution acknowledges this difference. It is advised (link to pdf in Dutch) not to prosecute sexting as long as the images are made and sent voluntarily, and are not publicly distributed.

It would be beneficial if such a nuance was given a place in education. This does not mean that it would be bad for young people to be aware of the possibility that abuse is possible using their photos.  Recent research shows that they are already quite aware (link to pdf in Dutch). 90% expects that sexy images will be distributed. Furthermore, the same research shows that over half of the respondents believe that young people who engage in sexting are “stupid.”

This is where another issue due to the one-sided approach can be found. Just focusing on the message “Don’t make sexy photos of yourself!” adds to the idea that it’s your own fault if someone abuses the images. This, in turn, contributes to bullying and slutshaming. Suppose your boyfriend were to share a picture of you with the whole school. In addition to processing his violation of your trust in you, you are now also confronted with social exclusion and stigma. The aforementioned RTL article referred to  the story of Lisa (link in Dutch), whose photo of her in a bra at the age of twelve was leaked. For the rest of her school years, she was bullied and verbally abused as “slut.” The people who distributed the pictures without consent are left off easy this way. The more the victim is blamed, the more the responsibility of the perpetrator is obscured.

A one-sided “you-had-it-coming”-education of victims is not the best method for internet safety. The on-line life, just like the off-line life, will be safer if there is more awareness of consent and respecting boundaries. Therefore, this is an idea for Safer Internet Day 2018: 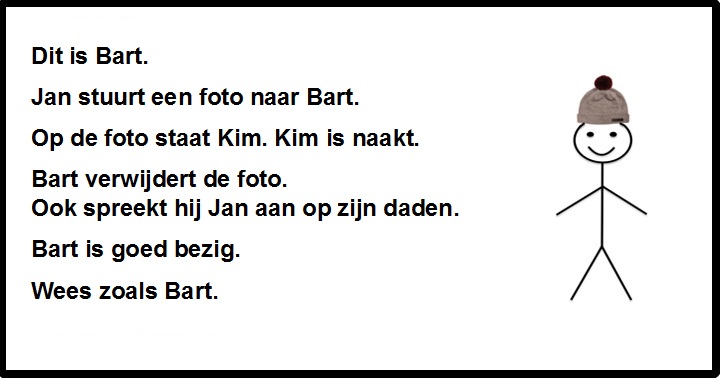 (in the image; translated from Dutch)

“This is Bart.”
“John sends a photo to Bart.”
“On the photo is Kim. Kim is naked.”
“Bart deletes the photo.”
“He also berates John regarding his conduct.”
“Bart is doing the right thing.”
“Be like Bart”