Our editors write about the feminist classics they have read, so you don’t have to – but in the end will still want to. This week Maartje Geels discusses We: A Manifesto for Women Everywhere, a manifesto for women who are sometimes struggling to make sense of it all (aren’t we all?)

What’s it called?
We: A Manifesto for Women Everywhere by Gillian Anderson and Jennifer Nadel.

Where would you know the authors from?
Most people know her as The X-Files Agent Scully, or even as detective Stella Gibson from The Fall. But fact of the matter is that Gillian Anderson spends a good amount of her time focussing not only on acting, but also on feminism. Her first book on this topic, We A Manifesto for Women Everywhere, is out now. Anderson chose to co-write her book with former BBC-journalist and friend Jennifer Nadel. Our first response when the book was announced: YAY. Written by two female, feminists friends. We approve.

Why you should definitely read this book?
Because it contains some wonderful tips on how to deal with everyday struggles. The title is actually slightly misleading though. It’s not so much a feminist manifesto but more of a mixture of a spiritual self-help book and an activist guide: how to change the world by taking charge of your own life.

Don’t read it if you expect essays on the importance of feminism in 2017. Do read if you like a female perspective on parenting, dealing with break-ups, depression and disappointing friendships. These women have lived through it all and share their personal experiences together with some highly practical advices. The book clearly has two different voices and some readers will more likely connect with Anderson, whereas others (me) will find it easier to relate to Nadel. The concept of letting different voices define feminism, also does ties in with the concept of intersectional feminism: there’s not a single truth but rather we should make room for different female voices. 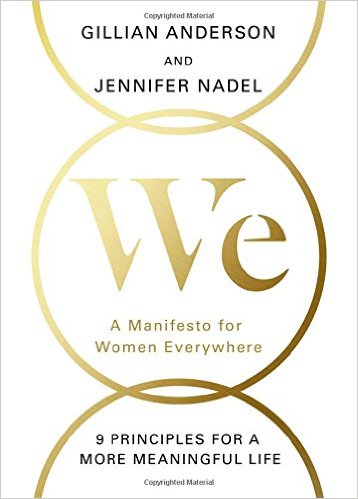 What you should know in case we haven’t convinced you to read this book?
The book contains three essential practices (meditation and learning how to be gentle, for instance) and nine principles. Each chapter starts off with some information, mostly on how old habits can still influence your life now on a daily basis. At the end of each chapter you’ll find an exercise and a reflection.

Though Anderson and Nadel advise to do all the exercises, some readers might already benefit if they choose to do only a few. Some exercises have their roots in Oriental wisdom, others in mindfulness (based on ACT, Acceptance and Commitment Therapy) and along the way you’ll come across some cognitive behavioural therapy-principles, too.

Readymade quotes for a party:
‘The three second rule: You can’t stop fearful thoughts arising, but you can choose what to do with them. You have roughly three seconds to interrupt a negative thought. Allow it to rest in your mind any longer and it starts to take hold. The faster you decline its invitation to engage, the less likely it’ll be to take up permanent residence. So when you have a fearful thought don’t invite it in and offer it tea and sympathy!” (page 147)

This article is also available in Dutch.