Marianne is plus size model, blogger and power lifter. Just like everybody else at Vileine she doesn’t always get the nonsense glossy magazines and social media throw at people like her. By thinking logically she tries to decipher the so-called catchphrases our society imposes on the female body. This week she will write about: laughing at fat people in the gym is not something you do, right?

Just last week I came across this meme which was shared a few times on Facebook. 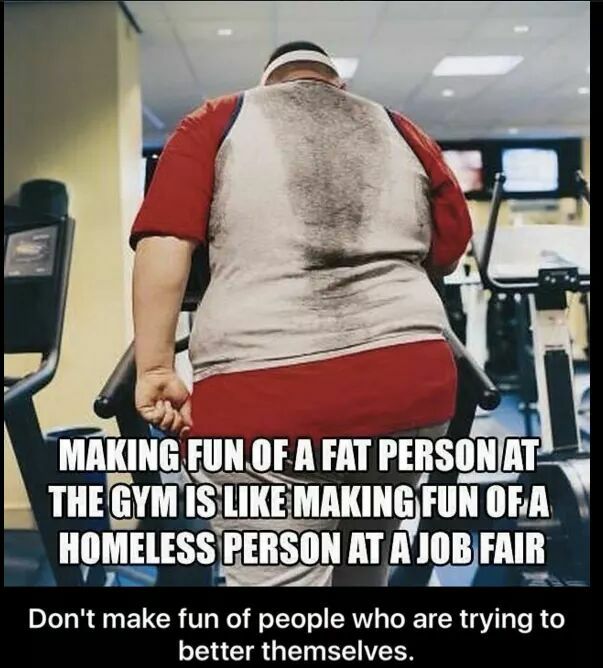 The Facebook message reads: “Respect everyone’s journey and those trying to fix the problem”. The original post was shared 330.000 times. There are several variations on the meme, with one saying that fat people in the gym are like sick people in the hospital. And another saying that it is weird to laugh at fat people at the gym because one can see with one’s own eyes that they are there to try and fix their problems.

“Great, right? And totally true, you shouldn’t laugh at fat people who are working out!”

True, indeed you shouldn’t laugh at fat people who are working out. The same goes for thin people working out. This also goes for thin people who don’t work out. Or fat people who don’t work out. You know what, let’s just not laugh at other people at all, fat or skinny, whatever they are doing. This meme appears to send out positive vibes to support people struggling with obesity, but nothing could be further from the truth.

“Huh? So why isn’t this meme supportive of fat people?”

What it actually says is that you can’t laugh at fat people, because ‘they are trying to fix their problem’. Because being fat is a problem, a problem that gets compared to homelessness and sickness. However good the intentions, that is just not acceptable. Secondly, this meme implies that fitness and working out only exist to lose weight.

“But the goal of working out is to lose weight?”

It is not weird that you would think this, because this is the message our society sends out. You work out to lose weight or to get a toned body. But there are many more reasons for working out actually. I myself work out three times a week with heavy weights, which I do to make my body stronger. I do yoga two times a week to make myself more flexible. And I go swimming often because I like to do so. I have worked out my whole life, but I didn’t become skinny. I did become happier, stronger and faster. I can think of many reasons why working out is awesome… and not one of those reasons has to do with losing weight.

When we think of working out, we think of skinny people. But there are thousands of full-bodied, sporty people. There are even fat Olympian athletes. It is about time our society starts to let go of its obsession with being skinny. Instead we should start focusing on other reasons why working out is fun. It would definitely result in fewer frustrated people working out in the gym. Because if your only way of measuring your results is through the amount of weight you’re able to life, you become frustrated too easily.

“Yeah true… but still, having respect for fat people is good, right?”

Yes, of course it is. But with this particular meme there is a requirement for earning this respect. You only need to respect fat people if they are trying to change something about their weight, if they are actively trying to fix the problem. In other words: fat people deserve respect only if they visibly try to lose weight.
This is my body, my beautiful full body, My so-called morbidly obese body, with a belly full of stretch marks that jiggles when I walk. And thighs full of cellulite, that can almost effortlessly squat 100 kilos. This body is not a “before-body” that only deserves respect because you think my after-body would look much skinnier. The reason you shouldn’t laugh at fat people doesn’t have anything to do with what they are doing, it simply has to do with the fact that you don’t need to be a mega douche bag.