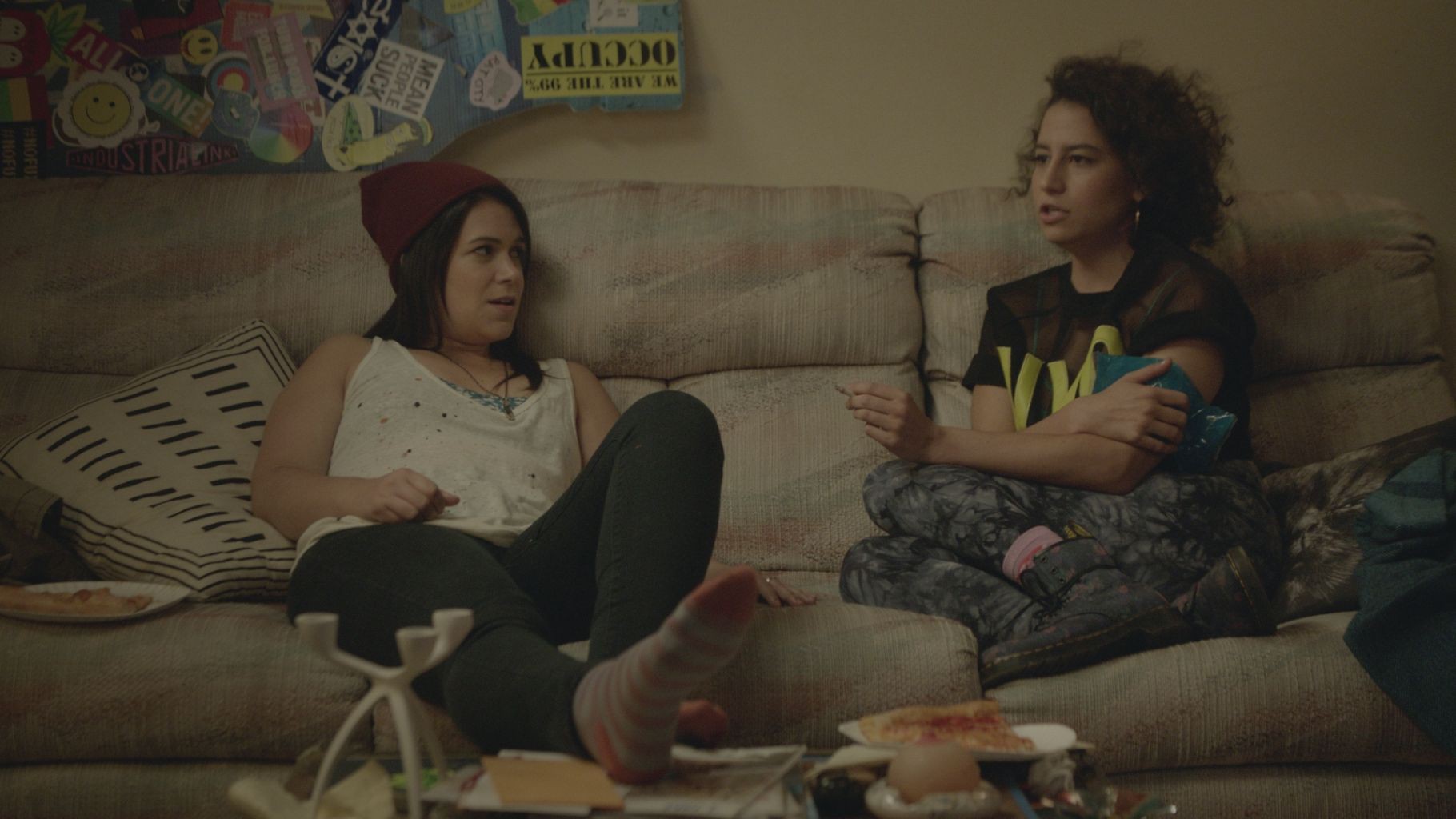 Floor Bakhuys Roozeboom gazes through her female lens at tv-shows, she shares her thoughts about what our favourite series and characters tell us about our own convictions, preconceptions and blind spots.

Broad City fills our screens with a friendship between women full of humour, honesty and imperfections, but without the self-loathing. And goddammit, that is truly refreshing. 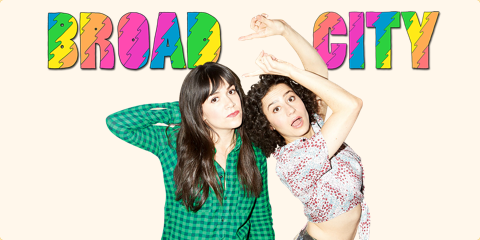 Sometimes you watch a show for the first time and you immediately wonder what took you so long to watch it in the first place. And then you wonder why shows like these didn’t already exist before. Broad City is that show. Fresh, young, honest and raw, with a touch of childish innocence that may remind you of classic cartoons like Tom & Jerry and Bugs Bunny. The show owes much of this to the almost slapstick-like physical talent of comedians Abbi Jacobson and Ilana Glazer, who are not only the main characters in Broad City, but are also the creative masterminds behind the show.

Broad City gives us an insight into the lives of BFFs Abbi and Ilana (based on magnified versions of the actresses themselves), two twentysomethings who live, work, date and, most of all, chill out in New York City. Sounds like a recap of almost every other women-focussed comedy that has aired in the last ten years? True. But still, Broad City is significantly different from Girls and Sex & The City, some shows that the media have compared Glazer and Jacobson’s Broad City to.

First of all there is the unpretentious birth of Broad City, which envelops the show in this lovable underdog kind of aura. It all started with actresses Abbi Jacobson and Ilana Glazer who met each other at an improvisation-workshop, became friends and decided to make a web-based series. What started with a funny but amateurish looking clip on YouTube, got picked up by comedy-vedette Amy Poehler and ended up being a hit on Comedy Central. Three seasons in, Glazer and Jacobson can count on endless numbers of high profile guest roles by comedians and even an appearance by then-presidential candidate Hillary Clinton, no less. Which is not too shabby for two talented actresses with a good idea who – until recently – were relatively unknown, right? 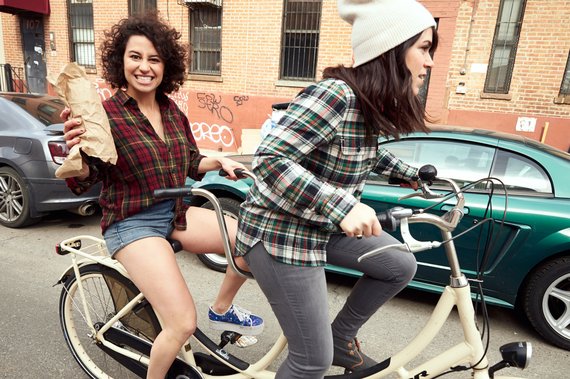 But the charming birth of this show is not the only thing that makes Broad City so popular. Broad City is known for a tone and visual feel that is truly unique from episode one onwards. Young and urban. Raw but touchable. Messy but fresh. The show distinguishes itself with a recognizable signature style and a spot on feeling for the glorious purposelessness of the twentysomething years, where nothing and thus everything is majorly important. Broad City captures with ease the essence of this careless, but oh so chaotic era full of shitty jobs, long nights, lazy afternoons, questionable fashion choices, absurd sexual encounters in messy apartments, bad decisions and endless (mostly stoned) conversations full of inside jokes in almost undecipherable friendship jargon.

Sex & The City without a male focus

Because the main focus of Broad City is friendship. It is about the unconditional, all-embracing friendship two women form in their twenties share with each other. Ann Friedman from The Guardian was spot on when she wrote: “Ilana and Abbi demonstrate what I absolutely found to be true in my 20s: when your job is falling far short of what you hoped and men are nothing but disappointment, your life is about your best girlfriends.” And however much the resemblances to Sex & The City pop-up in this comment, Friedman also pinpoints exactly where Broad City truly differs from SATC : in the fact that the love lives of the female characters aren’t the main focus of the show. Or as Friedmand said it: “Abbi and Ilana are more obsessed with each other than they are with men.” 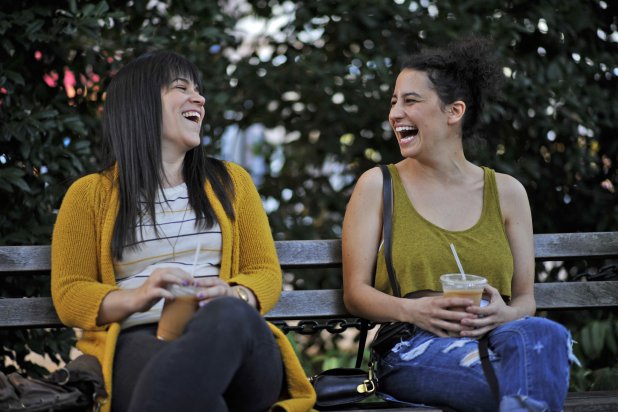 Girls without the weltschmerz

Broad City is a little bit like SATC without the male obsession and it is like Girls without the weltschmerz. Because however immature, inappropriate, irresponsible, hedonistic and purposeless the characters of Broad City may be, the show never gets the awkwardness and the seriousness that surrounds Girls sometimes to an almost depressing extend. Both series have their own tone, charm and right to exist. The value and purpose that the generation sketch of Girls gave us is not something I want to sweep under the rug. But it must be said: a show where the feeling of contemporary twentysomethings is captured, without a moral judgement of this generation is truly refreshing. Broad City doesn’t complain about the purposelessness of the youth, it celebrates this phase of not knowing, but at the same time thinking that one can do it all.

Amy Schumer without the self loathing

But the biggest strength of Broad City is the freedom and shameless bravado Glazer and Jacobson embody when they pop up on your screen. They present life as it really is, including all the nasty bits that are usually hidden away when it comes to female characters. It is a reality full of pooping, peeing, pubic hair, farts, bad sex, fat asses, tits that are too big and awkward situations. Their unpolished honesty and the way their imperfections fill your screens remind us of the humour comedian Amy Schumer showcased last year, and through which she became so popular. But where Amy Schumer is using herself and her body to make fun of in a self loathing way, Glazer and Jacobsen’s shamelessness is linked to freedom and confidence. Amy Schumer’s humour (however funny at times) comes down to the cultivation of female insecurity, awkwardness and self hate. Broad City turns this around and speaks from a ‘fuck the world’ kind of mentality and an infectious amount of self love that reminds us most of the girl power message from the Spice Girls in the nineties.

Broad City pinpointed for me something which I never knew I was aware of. I realized why seemingly shameless female humour is often times perceived as awkward. Awkward in a way that is difficult to capture with words. That awkwardness has nothing to do with sexist ideas about women not being able to be shameless and rude with their humour. It has to do with the female shamelessness of some comediennes in some shows where the forced frankness and liberating behaviour has the opposite effect because it is so forced. As if we are trying to distance ourselves from the unwanted male gaze with this shameless attitude and humour. But in doing so we actually only contribute to making this male gaze more powerful.

The refreshing thing about Broad City is that in the show of Jacobsen and Glazer, the male gaze simply doesn’t have a place. The universe of Abbi and Ilana is so self-evident and unapologetically female that viewers – men too – are forced to watch the show with a female gaze. Jacobsen and Glazer showcase a different femininity than the one which is under the spell of the Male Gaze. They showcase a femininity that is lived and embodied by women. Abbi and Ilana are sexual beings without being sexualised by an outside source. They poop, pee, fart, throw up, burp and masturbate, just like any other normal human being would do. They do this all without losing anything of their femininity. They gain pleasure from their romantic and sexual encounters with men and women, but don’t let it define them. They present their normal human bodies not as a statement, but with a self evident form of self love, which is rarer in female shows than we would like. They celebrate their messy lives, themselves, their bodies and sexuality in all their imperfect glory. No, in Broad City, the Male Gaze is not hated on, the Male Gaze just simply doesn’t exist. Which is truly a step forward.