RE: is a series of artices in which Vileine women respond to recent publications. Today, Philippa Raphet Meeng responds to  ‘Why Vogue’s whitewashing is not ok’.

Earlier this month, Vogue shared the cover of their March issue on their official Instagram page where they announced that this issue will celebrate modern American women. At first sight it looks like it does exactly what it says on the tin. The cover shows a number of models of different ethnicities and appears to reflect the diversity of the American women quite nicely. 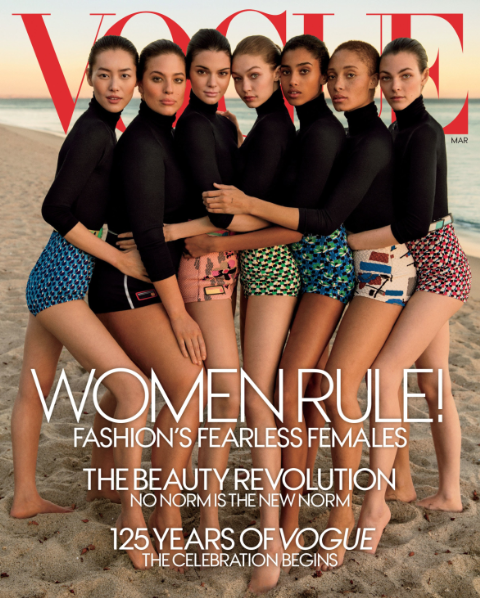 However, upon closer inspection there does seem to be one jarring issue with this celebration of modern American women: they’re all very thin. Even the one so-called plus-size model Ashley Graham (second left) looks very toned and slim, and if Buzzfeed hadn’t pointed out that she was a plus-size model very few people would have even realised she wasn’t a “regular” model.

Sure enough, if you were to point out this flaw a lot of people would automatically respond by saying “but that’s what models look like, they’re thin.” A lot can be said to counter this argument, but that’s a whole other discussion that we’ll save for another day.

The point that needs to be made, and of which the Vogue cover is a prime example, is that the media want to advertise certain products or ideas without actually using people who fit the bill. Using a plus-size model who is so slim she’s barely distinguishable from “regular” models is just the tip of the iceberg. Think of models like Graham modelling clothes for plus-sized women. Will they be able to identify themselves with these models or picture themselves wearing the same clothes as her? Probably not. A much better example of a truly plus-size model would be someone like Tess Holliday, yet somehow it’s hard to imagine her being chosen to grace the cover of a prestigious magazine like Vogue alongside other models to celebrate the diversity of the American women.

Of course this doesn’t begin and end with “regular” versus “plus-size” models. Think of all the obviously not pregnant models modelling maternity wear. Surely you would think models get pregnant too and wouldn’t mind diversifying and expanding (no pun intended) the type of clothes they model?

Not old and not physically handicapped

However, this is not an issue that limits itself to fashion alone. Dutch television has lately been showing an ad which promotes the use of a stairlift. This in itself is not a bad thing, because it enables the elderly and people with disabilities to continue living at home, even if they are no longer able to climb the stairs themselves. But, and this is a big but, of course the stairlifts are modelled by a woman who is nowhere near old enough to belong to the target audience, nor does she appear to have any physical disabilities.

Many will wonder why this we have to make such a big deal out of this. After all, we’ve all learnt that we shouldn’t take advertising at face value, right? The fact of the matter is that we have become so used to advertising showing us a thwarted picture of reality, that we no longer see it as problematic. If society simply chooses to accept that this is how advertising works and that there’s nothing wrong with it, nothing will ever change. And this is exactly the reason why it should be problematised. Because this is the only way we’ll ever see a truly diverse cover of Vogue.